How to make a Snowman costume!

…a break that I had been putting off because I wasn't quite sure how to do it… "mummy – I'm a snowman in the school play!"

Not so difficult I hear you say and that's what I thought when I set off to buy my lovely fleece fabric last Wednesday morning with the ambition of having it finished that afternoon!

I lay the fabric on the floor. Looked at it! Umm'd and err'd for a good 10 minutes… and then folded the fabric back up and decided to get on with the monkeys!

My task was only made difficult because of how I wanted the finished costume to look. I could have quite easily just made a little trouser like suit, but I wanted a costume that was shaped… and that's when it came to me! Saturday morning, 2am, I sat bolt upright in bed… 'it needs to be made like a pear!' All I needed was to see a photograph of a pear pin cushion and I knew I could do it.

I went straight back to sleep but was wide awake at 7.30 (which is unheard of on a weekend) googling images of pear pin cushions and drawing round my daughter on a piece of wallpaper.

For all you people out there who have no idea how to sew from a pattern… I'm with you! I make it up as I go along, but the more costumes I have made the easier it gets… so here is my first 'very professional' step of making a snowman costume…

…draw round the child in question – ta dah… 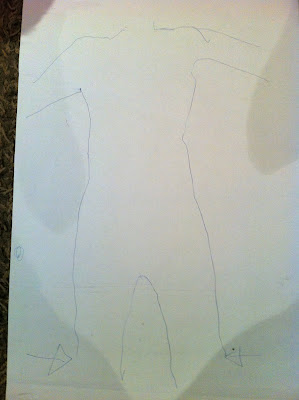 Step 2…  using aforementioned child template make up some kind of pattern! Feel free to just make it up and change it at any point! I do! 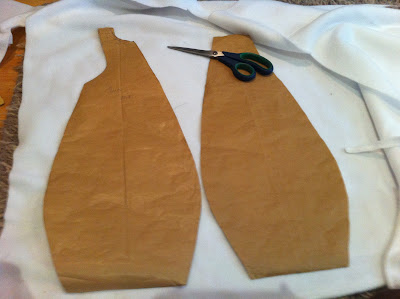 Step 3… pin pattern together and attach to child!
A. use old pins so that you don't blunt new ones.
and B. try not to catch said child with any pins! 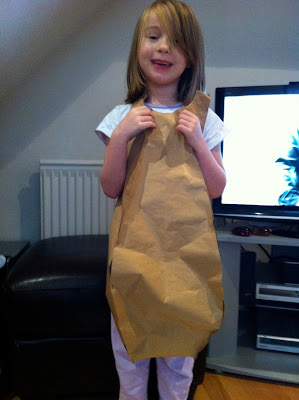 That is the sum total of my pattern making skills… I then just cut 2 of the middle sections and 4 of the edge pieces. This pear costume… sorry I mean snowman costume was made out of 6 segments (obviously!). So that was it really, I stitched all the pieces together and then because that was so easy I decided to put an edge around the neck and arm holes just to finish it off!

…this, apparently, is the only part of my costume making skills that my husband was impressed by! Thanks! 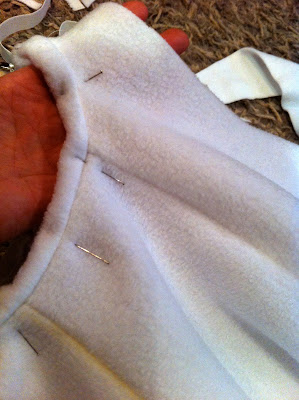 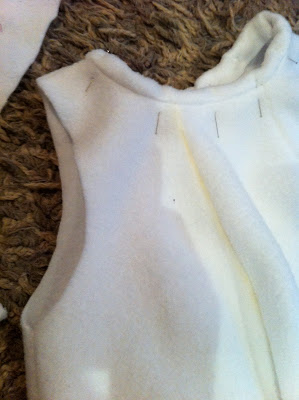 I also put some elastic around the bottom to pull it in tighter and cut black circles of felt for coal buttons. I stuffed a little bit of polyfill in just to lift them out a little. 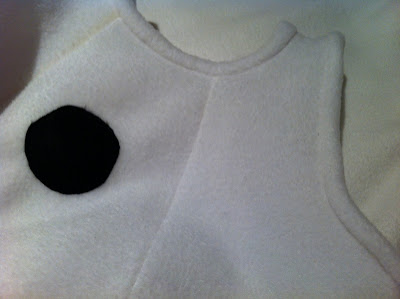 Then there was my favourite part… my little felt hat. I am so proud of the hat! I now know that tink has the head size of a Jamie Oliver pudding bowl!!!

It was pretty easy to make and it looks great. I'm thinking about making one for her that's lined with a really funky fabric and making a felt flower (this is my next challenge)… right back to reality… monkeys, monkeys, monkeys! Okay so maybe I'll do it when I have some time.

…made a carrot nose too! 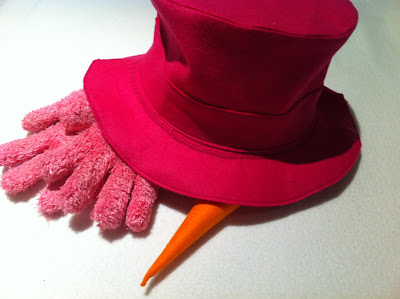 That's it… add a pair of white leggings, scarf and a pair of gloves and you have a little snowman! 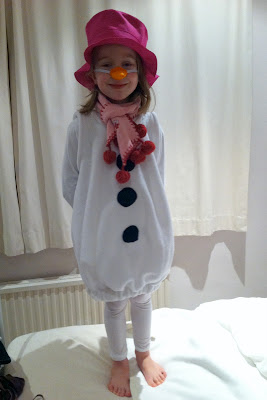 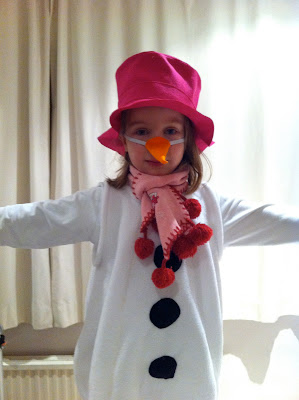 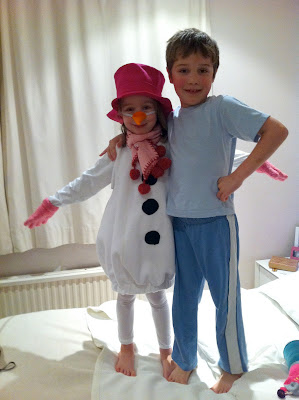 …and a proud brother who's pretending he made his little snowman!

I really wanted a brown tshirt to resemble twig arms but alas we haven't got one! I may try a black one and see how it looks.

…any one got a brown long sleeve T I could borrow?

If I'm honest, I'm not as pleased with it as I thought I would be! I am however, over the moon with my hat!

Only a day out of my monkey making mayhem, back to normal tomorrow! I may finish off the 5 little baby monkeys and they really will be one offs, never to be repeated… remember that! I really mean it this time!!!

Thanks for stopping by and feel free to leave me a comment!

Rachael
Posted by monkeyandsquidge at 20:35

Email ThisBlogThis!Share to TwitterShare to FacebookShare to Pinterest
Labels: Dressing up, Finished things

Thanks for reading – I would love to hear your comments.

My little group of followers – Thanks guys!